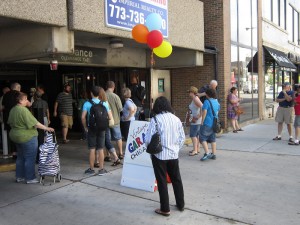 With scores of people waiting outside the gates, the first Vintage Garage Chicago opened its doors for the first time June 17, 2012. The vintage market featuring dealers offering exclusively retro goods (including vintage bicycles, clothes, etc.) will return on the third Sunday of each month, through October.

“There are always uncertainties when you start a new venture,” says promoter Melissa Sands, “but this one went off without so much as a hiccup.” Sands says setup was quick, the market opened on time and the gates remained busy with lines forming several times an hour.

“There was also a steady flow of vintage items moving out the door and into vehicles, destined for homes and apartments,” Sands says. Door surveys revealed customers came from in the neighborhood and throughout Chicagoland. About 20 percent found the market because they lived in the immediate area.

“That represents new audiences introduced to vintage because of the Vintage Garage,” Sands says. “I fully expect the word will spread and they’ll be back with their friends.”

With room for 100 or more dealers, Sands expects the numbers will continue to grow. Currently, dealers are coming from throughout Chicagoland and several states. Popular items include vintage bicycles, housewares, clothing, jewelry, appliances and decorative items.

Many took advantage of the bicycle racks supplied on the premises. The next Vintage Garage Chicago will be held July 15.

If you would like to sell vintage at the Garage, APPLY NOW.