People frequently ask me, "What do you buy?" I have favorites, but I will buy whatever appeals to me and that I can resell for a higher price. From 19th century English porcelain to a Hardy Boys board game from 1978. From a certain perspective, we find all vintage and antique categories fascinating.

We didn't start looking at art at estate sales until we moved to Chicago. It didn't take long to realize how many outstanding Chicago artists exist. Some are famous, some are not, and some are somewhere in the middle. We developed a new appreciation for genuine art. The type that is painted on canvas or drawn on paper. Real paint, not Monet's Water Lilies posters from the 1980s or Ansel Adams posters.

I had been called on a collection of vintage and antique jewelry (#1 favorite category) and and few weeks later was invited to look at other items.

When i saw this vintage, small but mighty oil painting, I was smitten. About 4 inches by 6 inches, a blue bird looking through a pair of binoculars.  Signed Abercrombie, 52.  I went home and did some research.

Gertrude Abercrombie. (1909-1977) An artist from Chicago with little formal training spent a brief period of time at the School of the Art Institute of Chicago. She lived in Hyde Park and enjoyed the time's bohemian lifestyle. She was well-known in the Chicago jazz community. One of her weddings was performed by Dizzy Gillespie. She chauffeured herself around in an old Rolls Royce. Gertrude came from an artistic family. Her parents were both accomplished opera singers. The family moved to Germany to advance her mother's career, but the outbreak of WWI forced them to return to the United States, where they settled in Illinois.

Self-portraits were frequent and she considered herself ugly.  At the Art Institute of Chicago, the painting "Self-Portrait of my Sister" is intriguing as she never had a sister.  It was how she saw herself or pretended to be someone else.  Her features were pointy and witch like and often capitalized on the look for her own amusement.

The 40's and 50's were arguably her best in terms of work.  Still life,  simple objects and a bit of surrealism. One of the first women to go into this genre.

My painting,  a blue bird looking through a giant pair of binoculars struck me.  Whimsical, simple but complex.  It was exciting to learn the collector I purchased it from, purchased it directly from Gertrude at an art show in the 1950's in Chicago.  I will add more about that as soon as I get more info.

Gertrude belonged to the Chicago Society of Artists and was employed as a WPA artist adding validation to her as an artist.

She became reclusive in the late 1960's and alcoholism and arthritis were front and center.  She died in 1977.

Currently my Gertrude Abercrombie collection consists of one piece.  I'd love to add to that.  I've looked at a few pieces so far but so far another hasn't panned out.  Please contact me if you have a piece or pieces.  I'd love to see! 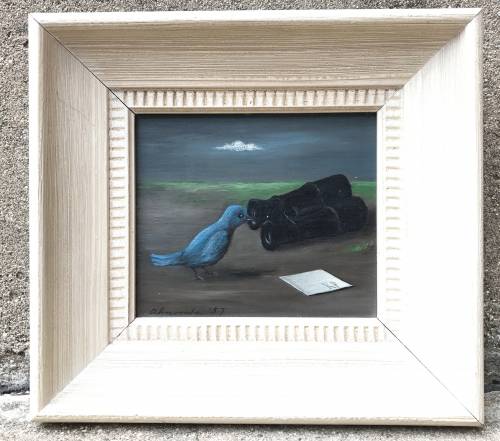 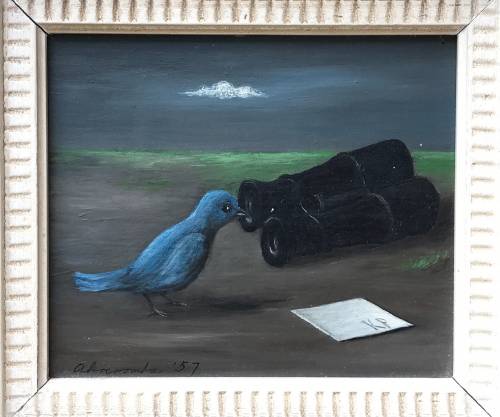