Memories of Memorial Days past and future Fourth of Julys. Sparklers, barbeque, family and backyards. The games were classic: Badminton, Croquet, Horseshoes, Bocci ball and....

My brother reminded me over the holiday weekend.  Remember no cable or cell phones? Hell, this was probably just pre-Atari; we had to be bored.

What could we have even been doing?! We convinced our Dad to take us to Sears and settled on a 3-pack combo game set.  Badminton, Volley-Ball and JARTS. 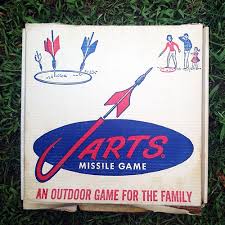 Maybe my Dad knew exactly what he was doing.  We were pretty whiny.

Are Jarts as dangerous as we've been told? Let's put the pieces together.

Created in 1950's or 1960's.  I couldn't find the exact year but it started with some guys who wanted to take their dart came outside the bar. (Brilliant) But it didn't gain in popularity as an "outdoor sport" until the late 1970's.  Manufactured by Regent, Franklin, Crown and Hasbro. Even Sears had a version.

Specs - Basically, each aerodynamic weighted missile came with a fin, 3 wings to help hit your target and a heavy 1 3/4 blunt metal tip.

The sets contained 4 Jarts. Each about 12 inches long.  It's all about accuracy. Toss the Jart into the middle of the target. To insure sticking the landing, you needed it to come straight down. The instructions showed throwing them with a rainbow arc. All of this, in the middle of your friends and family filled backyard.

It turns out, people were getting hit with Jarts all the time AND consumers complained. Whoever they called or wrote? Didn't answer. At one point there was a ban, due to accidents.  Someone acknowledged the complaints.  The companies that produced them offered the courts a compromise: They would come with a warning label and not be marketed to children. Courts said, "Ok, have a nice summer." Jarts were back on the market.

Then, a Dad from Riverside, CA, David Snow, lost his young daughter to a Jarts Missile accident in 1987.  From the backyard it sailed over the house, to the front yard and hit her with an unbelievable 23,000 lbs of pressure.  She was killed instantly.  This heartbroken and frustrated Father decided to fight Jarts until they were taken off the market. He held his ground and didn't give up til it was done.

David Snow (heart broken Father) was able to get them to relook at the statistics and it was telling.

"Over a period of eight years, lawn darts had sent 6,100 people to the emergency room. 81% of those cases involved children 15 or younger, and half of those were 10 or younger. The majority of injuries were to the head, face, eyes or ears, and many had led to permanent injury or disability."

Jarts have become known as one of the big, "OMG I can't believe anyone thought this was a good idea" type of toys.  How did we survive this? I had hoped to find what seems the ultimate vintage party game wasn't as dangerous as we thought. Wrong, it is.  So if you find that set at a garage sale and decide it's the 80's again, be careful!

Did you have Jarts when you were a kid?  Anyone ever get hurt at your family picnic? Tell me about it!

Original article in Los Angeles Times about the case that brought Jarts down.
Wikipedia- Jarts
How one Dad got Lawn Darts Banned 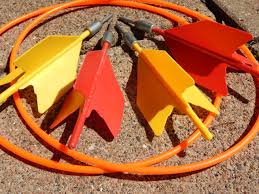