I faithfully spend Friday's poking around estates looking for treasure. On a recent excursion, I discovered the artist Narcissa Thorne.

Moving to Chicago 5 years ago, it took me a bit to find my footing in regards to vintage here. With so much history and nostalgia, my fascination comes from being a later in life Chicagoan. It was exactly what I had in mind when we created Vintage Garage's new theme: Retro Chicago. The goal is for vendors to find items either created in Chicago, about Chicago or that are created by Chicagoans and offer them at the show.

A few Friday's ago, the estate we were at was in the clean out stage. Meaning, most of what was left was going to be removed, donated, trashed etc.  We were excited to get one last shot at buying a few things and saving them from their certain fate. The owner had grown up in the house along with 3 generations of family members. We were almost done when one last box showed up with shadow boxes inside. She jokingly said, "You don't want these things."

I looked anyway and what I discovered was whimsical and well done. We took both pieces signed on the back by Narcissa Thorne. The owner seemed amused, but happy for us to have them.

Narcissa Niblack Thorne (1882-1966) was an American Artist known for her extremely detailed miniature rooms. Her works depict historical interiors from North America, Asia and Europe from the 1300's to the 20th Century. She was born in Vincennes, Indiana and her parents moved to Chicago when she was a child. She married her childhood sweetheart, James Ward, an heir to Montgomery Ward department store fortune. They lived in Lake Forest with their 2 children. 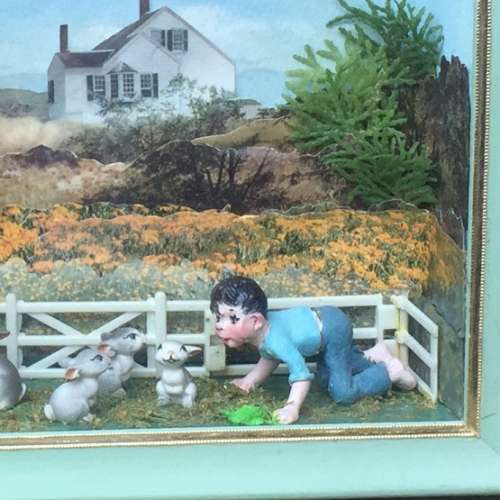 My theory on how Thorne began? She was a collector and the more that collection grew the more interested she became in creating her own pieces and rooms. It reminds me of us vintage lovers.

Thorne was obviously artistic and there are mentions of an uncle who sent minis from overseas that she loved. She created dollhouses for all of the girls in the family and for wards of the local hospital. As she became more skilled and her interest in interior design grew, the rooms and houses got more detailed. She designed the rooms and hired Eugene Kupjeck to build them. He was a talented man in his own right. The rooms, while pieces of art, are also a true history lesson on trends and decor of the times.

The first known exhibit was in 1932. In 1933, her works were exhibited in their own building at the Century of Progress Exposition in Chicago. A permanent gallery was established for Thorne's rooms in 1954. There are 100 known rooms in existence; 68 of them are housed at the Chicago Art Institute.

Thorne never sought payment for any of these creations and set up a fund to pay for the care and maintenance of the rooms at the Chicago Art Institute.  After 1941, the project was complete and she partnered with the Chicago Women's Exchange where she again collaborated with Eugene Kupjack again on miniature rooms, dioramas and shadowboxes created for the collector. These were then sold with proceeds benefitting local charities.

Both of my shadowboxes are small scenes: Cowboys, stopping for miner supplies and 2 children on a farm with rabbits. Both are absolutely charming and signed on the back. I am honored to have them in our collection now. This is a great #retrochicago find!

Links to a few interesting articles: